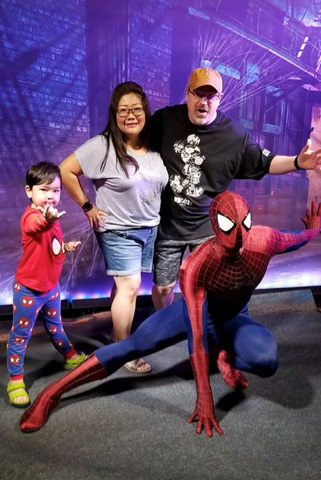 Caleb is a big Spider-Man fan. He’s got Spider-Man pajamas, action figures, t-shirts, hats and even a lifelike costume that he likes to wear whenever he gets the chance. When Caleb was diagnosed with cancer, Spider-Man became an even more important role model in his life because Spider-Man represented strength, courage and overcoming obstacles.

When Caleb was referred to Make-A-Wish® Colorado to have his one true wish granted, he decided to go on a Disney Cruise to sail the seas with Spider-Man and the rest of his favorite superheroes.

Before he stepped onboard, Caleb had a very important item to check off his to-do list: swim lessons. He wanted to make sure he could enjoy all the pool time he could get while on his cruise – and the lessons worked! Caleb splashed around and went down many waterslides during his stay on the cruise ship. He even swam next to a stingray!

The highlight of his trip was meeting the superheroes from his favorite movies. In every photo, no matter which superhero or character stood next to him, Caleb posed as Spider-Man with his hands out ready to sling some webs. When he finally met the real Spider-Man, it was difficult to distinguish who was who! According to Caleb’s dad, it’s Caleb who is the real superhero. “He’s been a very strong kid through the spinal taps, drugs, needles, and chemo every day. I couldn’t go through what he’s endured. That’s why he’s my hero.”

Caleb’s wish brought hope to his family in the months leading up to their departure. “Just like for a person in the desert thirsting for water, a drink of water, isn’t just water. It is life-giving, life-invigorating and life-changing,” his mom explained. “For all the hardship, tears, and fears, the needle pokes, hospital stays, and awful tasting medicines Caleb had gone through the past two and a half years, going to the Disney Cruise will be a profound boost to him to continue with his treatment.”

Caleb’s wish was a time of joy and respite from his time at the hospital. His mom said Caleb had “the most wonderful time of his life” and the family will treasure the memories of his wish forever, including every picture of Caleb in his Spider-Man pose.