For six-year-old Sean, the sight and sound of a garbage truck is mesmerizing. “He does nothing but watch garbage truck shows, documentaries, shows about recycling, anything like that,” his father, Justin, said. However, due to his immune system disorder, Sean has had to awe over garbage trucks from a distance for his entire life. Despite this limitation, his love for garbage trucks has only continued to grow.

When Make-A-Wish Colorado gave Sean the chance to wish for anything, Sean knew immediately he wanted to transform into a garbage man. His wish was incredibly special because it was the 5,280th wish to be granted by Make-A-Wish Colorado over the past 36 years. This number represents the Mile High City of Denver, so everyone jumped on board to help! Sean’s wish began with a tour of Denver’s GFL Environmental facility where he learned more about waste management. He even saw a car get crushed, which was another dream come true for this wild child. However, nothing compared to the moment
when he donned his bright yellow vest and orange gloves to transform into Sean the Garbage Man!

As soon as he stepped outside, he spotted the gigantic, neon-green garbage truck waiting for him and he didn’t stop grinning for the rest of the day. He was ecstatic because the truck was front-loading, just like all of his favorite toys! After running around the truck multiple times to check it out, Sean was ready and eager to start his route. Sean collected his first round of trash at Denver7 News and then headed inside to tour the station. After pretending to be a news anchor for a while, he decided it was time to get back to his real job … the garbage route!

His next stop took Sean outside the Denver Broncos Stadium, where there were a few more dumpsters waiting to be unloaded into his truck. After collecting all of the trash, Sean, bursting with excitement, gave every volunteer and staff member cheering him on a detailed tour of his truck. “This right here is where all the goods dump,” Sean said pointing to the back of the truck proudly.

Sean’s next stop was inside the stadium, where he took a tour and ran around the field with his dad. From there, the garbage man needed to refuel and made a pit stop at Maggiano’s Little Italy. The final stop on his route was at Denver Fire Station 6. Sean’s eyes lit up when he walked in because he realized how many trucks there were to play in and how many horns there were to honk! Sean had plenty to inspect. He ran around the fire station with a new question falling out of his mouth at every turn, never running out of energy or laughter.

“He makes everybody smile,” his dad said. “He’s the light of everything for us.” Filled with cookies and new knowledge about fire trucks, Sean loaded back into his garbage truck for his final ride back to his hotel, The Ritz- Carlton, where he was welcomed like a celebrity garbage man by volunteers and Make-A-Wish staff holding signs and fake trash. Before entering his party, Sean, like the true garbage man he is, took a trash bag and collected everyone’s trash as he walked in with an unforgettable grin, ready to celebrate a successful trash route and wish day. 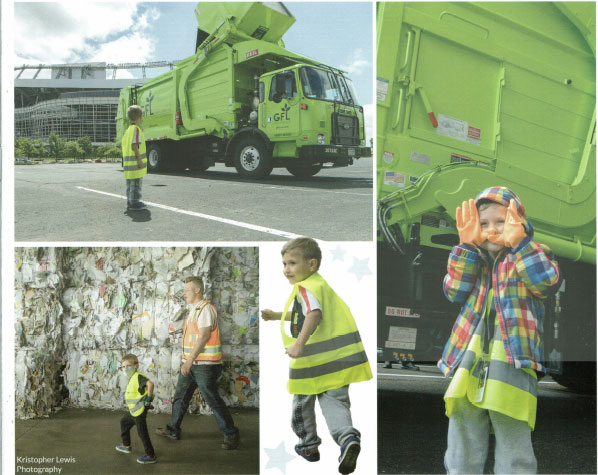