Santa at the Listen Foundation

For the past couple of years one of the Board Members of the Soule Family Foundation has played Santa Clause for one of their Supported Organizations, the Listen Foundation. The Listen Foundation was founded in 1969 and was the first organization in the world to advocate Listening and Spoken Language therapy (LSL), and remains Colorado’s only parent centered, auditory-based communication approach for teaching children who are deaf and hard of hearing spoken language through listening.

The Listen Foundation provides for and assists children who are deaf or hard of hearing and their families, with access to a proven speech, language, and listening therapy method to help them achieve a life of independence.

Santa’s role with the Listen Foundation is to be Santa of course, but also to read the children a book that requires them to respond to listening rather than sign language or lip reading. As Santa reads his story to the children they need to respond with something that is mentioned in the story. The story for 2017 was about a group of children who were playing a game that required them to search for the different colors that were in the story. As they heard the colors named when the book was read they would hold up colored flash card.

The book was written specifically for the Listen Foundation by Santa himself and so it was easy to get the kids involved. 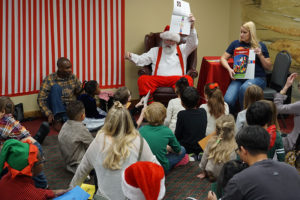 Santa encouraging the children to listen to his assistant and follow along with her as Santa reads the book. 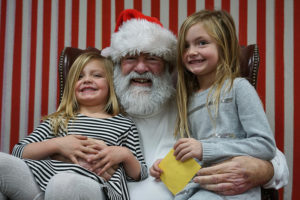 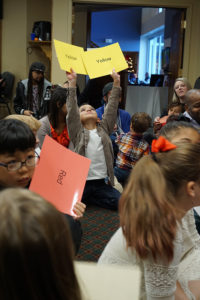 Two-One young man shows his excitement when he hears the color he is holding. 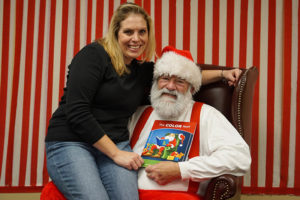 Santa with his niece who illustrated the book he read to the children.

Rumor has it that Santa is working on a new book for this year and we know it will be fun. Santa had about thirty children that sat on his lap last year and he is looking forward to many more this year as they come up to tell him what they want for Christmas. Each child will receive their own copy of this year’s book from Santa.